Continue with Gmail Continue with Facebook Login with Email & Password By continuing you are adhering to our Terms and Conditions and Privacy Policy
90
Babymigo
Are you AS with AS partner and pregnant?? You can screen your unborn baby for Sickle Cell Disease at Genomix Nigeria 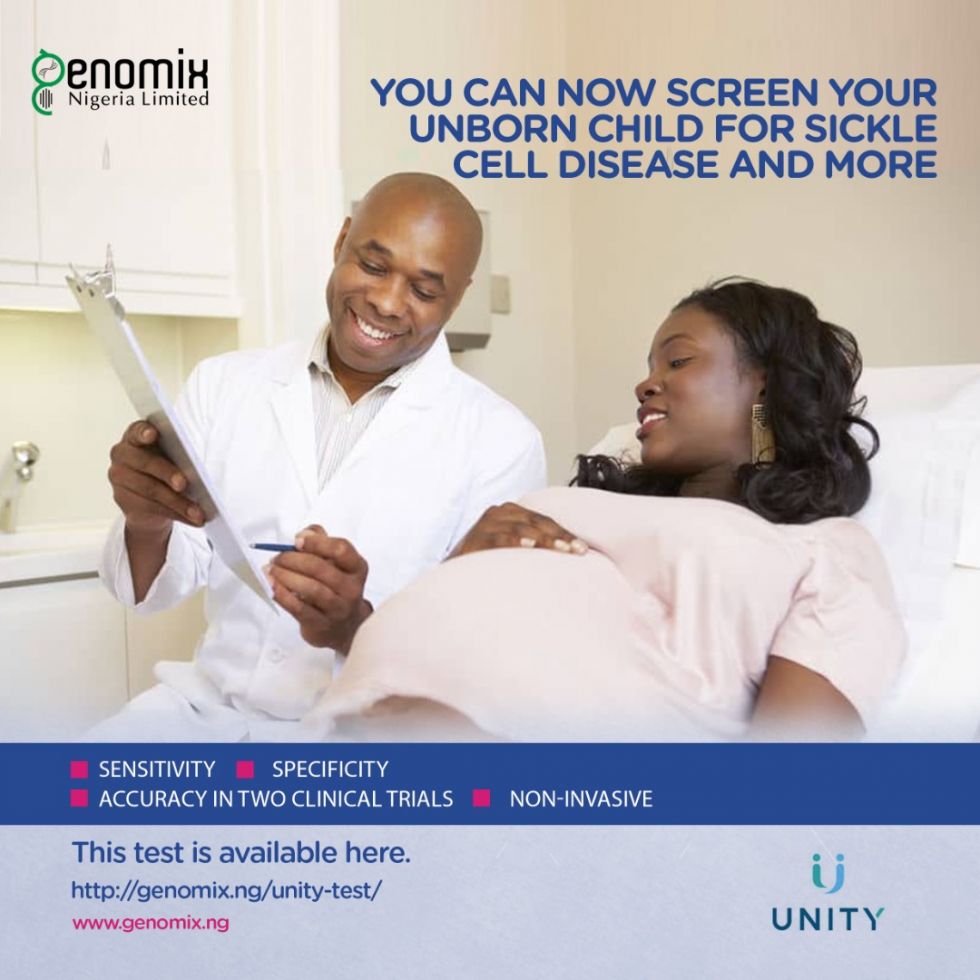 The problem with these sickle-shaped cells is that they get stuck together and often block the small blood vessels in the body. This prevents blood from flowing as it should and can cause pain and even organ damage in severe cases.

If you are pregnant and you and your spouse have AS genotype, you can go for a test called the Unity Test that can enable you to find out if your unborn baby has inherited the sickle cell gene from both of you.

The Unity Test is beneficial to you and your unborn baby because it is a non-invasive blood test, unlike Amniocentesis which is an invasive test that requires a needle to be inserted through the uterus to collect the amniotic fluid to check for birth defects and genetic conditions. Another invasive test is called the Chorionic Villus Sampling (CVS) which checks tissues taken from the placenta.

If you opt to carry out the Unity Test on your unborn baby for sickle cell disorder prior to birth, there are a number of advantages. The test can be used to confirm or rule out whether your baby has inherited the disease.

This type of testing is offered during pregnancy if there is an increased risk that the baby will have a genetic or chromosomal disorder and help you make decisions about a pregnancy.

For genetic testing before birth, a blood test can screen pregnant women for some disorders. Unity Test is the only test that screens mother and baby for five commonly inherited conditions from a single tube of blood and one of these diseases is sickle cell disease. The procedure is simple and the results are ready in three weeks. All that you need to find out if your baby is at risk of sickle cell disease is this simple test. All that it requires is one tube of blood from your arm, so it's safe for you and safe for your unborn baby.

Unlike all other carrier screening, Unity Test is faster, cheaper and safer. It is also convenient because the DNA sample of the father is not required to assess the fetal risk assessment.

The Unity Test enables every couple to have access to safe, accurate and affordable prenatal screening for sickle cell disease

The test consists of two steps both of which are performed from the same blood sample taken from the mother.

In the first step, your own status as the mother is ascertained. If your status has been confirmed and you are a carrier of the sickle cell gene (AS), the blood sample will then be tested to determine the status of your unborn baby.

The test quality parameters are excellent with accuracy ranging up to 99 per cent, which surpasses the gold-standard for carrier screening for sickle cell disease.

The Unity test can change your situation and offer you great benefits.

At 10 weeks with only blood, every pregnant woman can now screen their unborn baby for Down’s syndrome and know baby’s gender

Down syndrome is one of the commonest abnormalities in Nigeria and has been termed a public health concern. In an interview with the Marketing Consultant, Genomix Nigeria Ltd, Onuora Molokwu, he said the chromosomal abnormality can be eradicated in Nigeria if pregnant women opt for NIFTY test, which is the Non-Invasive Prenatal Test. In this interview with Martins Ifijeh, he further revealed that the test can also tell the sex of the baby even at the tenth week of pregnancy. Excerpts:

What Is Nifty Test?

It is a Non-Invasive Prenatal Test (NIPT), which means the test can be done by taking the woman’s blood and then checking whether or not a baby has chromosomal abnormalities in the formative stage. Before now, the method used in ascertaining it usually comes with some side effects. So with improved technology, we can now take blood samples of pregnant women who have been pregnant from 10 weeks upward and then conduct the test. So if that child has some abnormalities, you can either decide whether or not you want the pregnancy.

This test ensures a couple who want to have babies have better chances of knowing what to face in future, instead of waiting till the child is born before they know whether the child is normal, has Down syndrome or other forms of abnormalities.

How are these tests done through the woman’s blood when the baby’s DNA is actually what is needed?

The test is called noninvasive because it is not surgical. It is taken from the blood of the woman unlike what usually obtains where you have to get samples from the baby in the uterus, which could result sometime in miscarriage or infection. So now we don’t have to do that because there is free fetal DNA in the mother’s blood.

And for the DNA reading to be sensible, you need at least four per cent of it in the mother’s blood, which can be gotten at about 10 weeks of pregnancy. What we are looking for are chromosomal abnormalities, and we call them aneuploidies.

Every human being has 23 pairs of chromosomes. All the abnormal ones are not compatible with life except for three, which means despite the abnormalities, these three means the child born alive; they are the chromosomes 21 (Down’S syndrome), 18 (Edward’s Syndrome) and 13 (Patau’s syndrome). Unfortunately, for chromosome 13 and 18, the child will last only for a few months and die, but for Down syndrome, the child can live for long.

What else can the technology test for?

The NIFTY can also tell the sex of the baby even at the tenth week of pregnancy; which means the couple will not have to wait till five months before they know the sex of their child.

Research is presently ongoing to ascertain other things it can be detected, for instance, sickle cell disorders. That however is still work in progress. So the NIFTY is a screening test, it is not a diagnostic test?

How is NIFTY screening test different from a diagnostic test?

The NIPT test will tell you the foetus has an increased risk of a particular abnormality.

Does every pregnant woman require this test?

Yes, they do. Before what we used to do is that once the mother has a risk factor like previously having a child with abnormality or she is of a particular age, we do this test, but now it is advisable every pregnant woman do it. In some countries, they have started doing it for everybody. Countries like the Netherlands first started with people who are at risk of chromosomal disorders, but now they do it for every pregnant woman.

I thought the blood of the foetus and the mother is separate. How come NIPT can be done using the mother’s blood?

The peculiarity in the human placenta is that it is like a parasite to the human body, such that it attaches and invades the woman’s body.

Is this technology available in Nigeria?

Yes. It is now available in Nigeria. Genomics Nigeria Limited, an independent company, has the sole franchise for the NIFTY test in the country. When the screening is done, the blood samples are then sent abroad and in 10 days the client gets the result.

Nifty is a brand managed solely by Genomics in Nigeria. The NIPT is the generic name for this kind of test.

In a situation where you find out there, is a possibility of abnormality, are there ways to correct it in the foetus?

No there are not. Let’s get it right; structural deformities can be corrected, but this is at the level of the chromosome which cannot be corrected.

But there is genetic altering. Why can’t it help in this regard?

Gene editing is the newest kid on the block, but that is not done yet. For now, it is unethical, because it can be used to do a number of good and bad things. Have you seen what is happening with GMOs now? that can also be done in humans; imagine creating a human that can never get tired or even sweat, if allowed, it can be used to create terrible things as well, that is why for now it is not allowed.

What are the conditions in our environment this technology is likely to help address?

This test detects if a child will have Down syndrome. It is the commonest aneuploidies compactable with life, and this is a common abnormality in Nigeria. With the NIFTY test, Down syndrome will be a thing of the past. What this test looks out for are chromosomal errors.

That is why we are saying everybody should do it early when it is earlier to make decisions. Before you do the test at all, there is pre-screening counselling where you need to know the implication of the test; what can be the results, what can be options if the test shows positive, and so on. At that point, the couples are already for whatever comes. As much as possible we encourage people to have it early.

A lot of babies die before they are born because the seed is not good. Some even die months after birth. in the uterus. Some patients will argue with you that their babies were healthy two weeks ago, and want you to explain how he or she now died; meanwhile, the baby may have aneuploidies not compactable with life.

One of the clues to even advise pregnant women to do the test is when such a woman has lost one, two or more pregnancies. It might just be there is a chromosomal abnormality somewhere. Such people are advised to take the test before they even go too far?

How expensive is this test?

It is an affordable test. It’s about 190,000 to 200,000. If you take it as a priority and you imagine how much it will cost to raise a child with Down syndrome, you will know the test is not expensive at all. One of the issues we have in this part of the world is we do not take our health as a priority. Cost is about what is important to you. If you have a baby with Down syndrome, you will know how much it cost to look after him or her, and such a baby will most likely not give you any return on investment in the future.

What advice would you tell such couples?

Well, ‘God will do it’ is also an option, but when the result comes be ready to accept it. The decision you take is still up to you. It is like seeing couples who are AS and AS. Their decision to go ahead with the marriage is up to them. So if they have SS children, they will also live with the outcome. Even if you say you will pray about it, at least you know exactly what you are praying for. You won’t pray amiss if you already know your pregnancy may turn out to produce a child with Down syndrome.

This is why Bananas are good for babies (and kids too)

7 important Guides to follow when Caring for your newborn baby

Last Chance to win up to 5m in cash & other amazing prizes in the Cussons Baby Moments Competition...

Pears wants the cutest babies in Nigeria to join its ‘Baby of the Year’ competition tagged ‘Cu...

How cool would it be to have your baby in the USA at a reasonable Budget? This company arranges ever...

How Much Formula Milk Does my Baby Need?